MacBook has everything you need to do everything you want. Faster than ever, it features a 2.13GHz Intel Core 2 Duo processor and 2GB of memory, so you’ll have more than enough horsepower to get the job done. Advanced NVIDIA GeForce 9400M graphics provide outstanding performance for 3D games and graphics-intensive applications. With a larger 160GB hard drive,2 you have plenty of room for all your photos, movies, and music. And it comes with a SuperDrive for playing and burning CDs and DVDs. MacBook lets you stay connected with fast AirPort Extreme 802.11n Wi-Fi.3 While connected, you can video chat on the go using the built-in iSight camera.4 At 1.08 inches thin and just 5 pounds,5 MacBook slides effortlessly into your backpack, putting a world of advanced features within your reach. And since it’s sure to become a constant companion, a durable white polycarbonate shell keeps it ready for the rough and tumble of everyday life. (2)1GB = 1 billion bytes; actual formatted capacity less. (3)Based on an 802.11n draft specification. Wireless Internet access requires a base station or other wireless access point and Internet access; fees may apply. Some ISPs are not currently compatible with AirPort Extreme. (4)Testing conducted by Apple in May 2009 using preproduction 2.13GHz Intel Core 2 Duo–based MacBook units. Battery life depends on configuration and use. See www.apple.com/batteries. The wireless productivity test measures battery life by wirelessly browsing various websites and editing text in a word processing document with display brightness set to 50%. (5)Weight varies by configuration and manufacturing process.Amazon and the manufacturer are happy to offer this item in easy-to-open Frustration-Free Packaging. A Frustration-Free Package comes without hard plastic “clamshell” casings, plastic bindings, and wire ties. It’s designed to be opened without the use of a box cutter or knife and will protect your product just as well as traditional packaging during shipping. Products with Frustration-Free Packaging can frequently be shipped in their own boxes, without the need for an additional shipping box. Learn more about Frustration-Free Packaging.

Stylishly and intelligently designed for your on-the-go digital lifestyle, Apple’s MacBook is the perfect confluence of affordability, innovation, and powerful computing. This latest iteration of the affordable “white” MacBook line (model MC240LL/A) gets a boost in processing power thanks to the 2.13 GHz Intel Core 2 Duo processor as well as storage space with a 160 GB hard drive–plenty of room for music, photos, videos, and more. 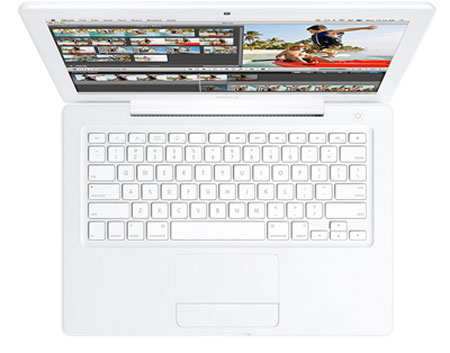 Apple Innovations
One of Apple’s most celebrated innovations is the MagSafe power adapter connector with offers a magnetic connection instead of a physical one. So, if you happen to trip over a power cord, you won’t send MacBook flying off a table or desk–the cord simply disconnects, without damage to either the cord or the system. As an added nicety, this means less wear on the connectors.

Cleverly integrated above your MacBook display is an iSight camera, providing easy video chat capability when using iChat. You can also snap photos in Photo Booth to send via email, as well as record videos and then edit them in iMovie before uploading them to web sites.

The magnetically connected MagSafe power adapter breaks cleanly away, without damage to either the cord or the MacBook, if you trip over the cord. 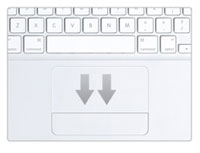 With two-finger scrolling, the trackpad becomes a fast track to wherever you want to go. The trackpad can tell if you’ve got one finger on the pedal, or two. With two, you can easily scroll around your documents or open contextual menus. When you need right-click functionality, simply open “Keyboard and Mouse” in System Preferences and enable the secondary click preference. Opening and closing your MacBook is also a pleasure, thanks to a magnetic latch that catches without a catch. And because it’s a magnet, there are no moving parts to snag, jam, or break. 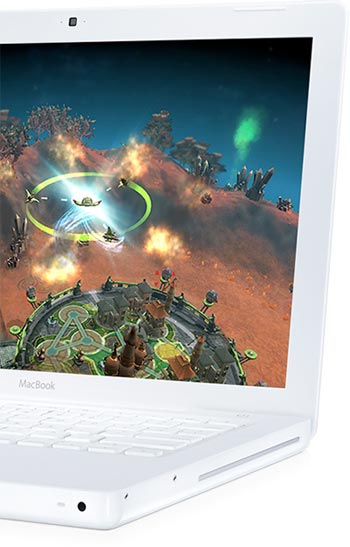 The hafnium-infused circuitry–which reduces electrical current leakage in transistors–conserves even more energy, giving you more time away from the wall outlet. With a substantial 3 MB of shared L2 cache, data and instructions can be kept close to the two processor cores, greatly increasing performance and allowing the entire system to work more efficiently. And, because the processor cores share the L2 cache, either can use the entire amount if the other happens to be idle.

Wireless Connectivity
The built-in 802.11n wireless networking provides up to five times the performance and twice the range of 802.11g, but it’s also backward-compatible with 802.11a/b/g routers, enabling you to communicate with the a wide variety of Wi-Fi resources. It works seamlessly with the new AirPort Extreme with 802.11n. Use the built-in Bluetooth wireless technology to connect to your PDA or cell phone, synchronize addresses, or download pictures from your cell phone. You can also use a wireless headset for iChat audio chats and VoIP calls as well as quickly share files with a colleague.

Display and Graphics
Whether you’re working on a Keynote presentation or watching a movie before you catch a flight, every document, video, and photo on your MacBook will look sharp on the glossy 13.3-inch widescreen display. With pixel-perfect 1280-by-800 resolution, it’s great for viewing and working with media. Video is powered by the integrated NVIDIA GeForce 9400M graphics processor, which shares 256 MB of DDR2 SDRAM with main memory. Graphics-intensive features in iPhoto and iMovie are smoother and 3D game play–from Spore to Call of Duty–is faster and more responsive. You’ll get extended desktop and video mirroring, with simultaneous support of full native resolution on the built-in display and up to 1920 by 1200 pixels on an external display–both at millions of colors

Video Conferencing with Built-in iSight
Artfully placed in the display bezel is an iSight camera, which enables easy video conferencing as well as allows you to snap pictures of yourself and create video podcasts. Using the iChat AV application, video conferencing is integrated into your iChat buddy list, so initiating a video conference is a breeze. iChat also lets you hold audio chats with up to 10 people and provides high-quality audio compression and full-duplex sound so conversation can flow naturally. For video podcasting, you can record a short clip using the iSight camera, then use iWeb to create a video blog entry or post your GarageBand-recorded podcast.

Connect to your network, a desktop monitor and all your peripherals with two USB 2.0, one FireWire, one Mini-DVI video output, and one Gigabit Ethernet.

Every Mac comes with Mac OS X Snow Leopard, the world’s most advanced operating system, and iLife, Apple’s innovative suite of applications for managing photos, making movies and creating and learning to play music. Snow Leopard builds on a decade of OS X innovation and success with hundreds of refinements, new core technologies and out of the box support for Microsoft Exchange. iLife features iPhoto, to easily organize and manage photos; iMovie with powerful easy-to-use new features such as Precision Editor, video stabilization and advanced drag and drop; and GarageBand which introduces a whole new way to help you learn to play piano and guitar. 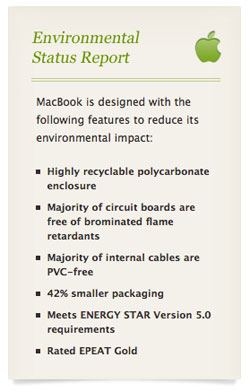 Because Apple makes both the hardware and the software for the MacBook, they’re designed to work together to produce a smarter product that uses less electricity. For instance, to reduce energy consumption, the MacBook hard drive spins down automatically when inactive. The MacBook also decides which processor–CPU or GPU–is best suited to efficiently perform a task. The processor even throttles down to save power between keystrokes as you type. Together, these adjustments make the MacBook much more energy efficient and result in fewer CO2 emissions.

The MacBook has also earned the highest rating of EPEAT Gold. The Electronic Product Environmental Assessment Tool, or EPEAT, evaluates the environmental impact of a product based on how recyclable it is, how much energy it uses, and how it’s designed and manufactured.