Keep entertainment freedom at your fingertips with the VIZIO 8″ Tablet with WiFi. Featuring a high definition 8″ touchscreen -it’s your movies, TV shows and music in a thin, ultra-light design. Stay ahead of the game with hundreds of thousands of apps from the Android Market. Part of the VIZIO Internet Apps Plus experience, the VIZIO Tablet offers an elegant, easy-to-use user interface. It redefines entertainment with more choice, more fun, more freedom for all. Its universal remote app controls everything in your home theater, while its built-in HDMI port enables HD video output to your TV. Three strategically placed speakers deliver stereo audio in landscape and portrait modes for movies, music, games or video chats. Built-in 802.11n WiFi and Bluetooth capability offer optimum connectivity, a front facing camera makes it ideal for video chats, and you can store all your media thanks to 2GB of internal storage with a MicroSD card slot for added space. Now that’s entertainment freedom.

Keep entertainment freedom at your fingertips with the 8-inch VIZIO Tablet (VTAB1008), which delivers movies, TV shows, and music in a thin, ultra-light design. Access hundreds of thousands of apps from the Android Market, and smoothly multi-task between browser and apps. Connect to your wireless network via ultra-fast Wireless-N Wi-Fi (802.11n) and even use the tablet as a universal remote control with the integrated IR blaster. 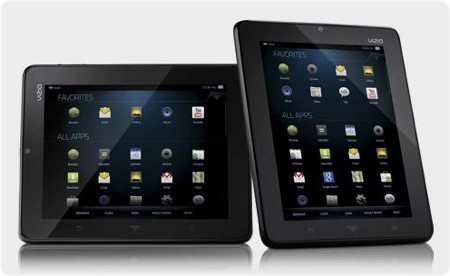 The VIZIO Tablet features an 8-inch, high-resolution capacitive touch screen, front-facing camera for video chat, and unique three-speaker configuration for stereo audio playback in both portrait and landscape modes. Its universal remote app controls everything in your home theater, while its built-in HDMI port enables HD video output to your TV. Other features include Bluetooth connectivity, 2 GB of internal storage, microSD memory expansion up to 32 GB, and USB port (see a larger image with all the ports).

Powered by the Android operating system, it’s also the first product in the VIZIO Internet Apps Plus (V.I.A. Plus) ecosystem, which will bring a unified, intuitive user experience across a wide range of devices, including HDTVs, Blu-ray players, smartphones, and more. The V.I.A. Plus tablet ecosystem offers the same attractive, yet functional design as found on V.I.A. Plus enabled HDTVs.

Master your domain with the VIZIO Tablet’s built-in IR blaster and universal remote control app. This VIZIO-exclusive app enables the Tablet to communicate with your home theater devices and control them all with the Tablet. You can also set up a profile for each room in your house and then control those devices as you move from room to room. The built-in HDMI port is fully HDCP compliant so you can output HD video to multiple TVs and monitors, making it a breeze to watch HD content on your big-screen HDTV (requires HDMI port). 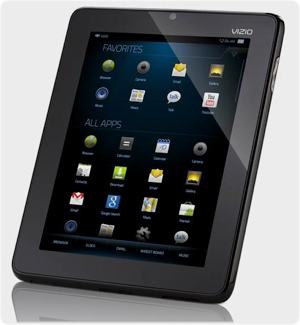 Powered by Android 2.3 and the VIZIO Internet Apps Plus (V.I.A. Plus) ecosystem.

As you change the VIZIO Tablet’s orientation, it intelligently transfers the sound to two of the three strategically placed speakers to deliver stereo audio in both landscape and portrait modes for movies, music, games, or video chats.

Find your way with the VIZIO Tablet’s built-in GPS, which doesn’t need Wi-Fi or 3G/4G to operate.

The VIZIO Tablet has room for all your media. In addition to the 4 GB of internal storage (2 GB user accessible), you can add more memory storage via the integrated MicroSD slot, which accepts MicroSD/MicroSDHC cards up to 32 GB in size.

Smart Design, Inside and Out

The VIZIO Tablet can be easily used in either landscape or portrait mode, as the screen automatically switches its orientation to match how you hold it. Additionally, touch-sensitive control buttons (Home, Back, and Menu) change their position and availability when you switch orientation (see larger image illustrating the control buttons). On the home screen you can add up to five of your favorite apps to the bottom dock for quick access, create categories of apps, and easily view notifications of new e-mails and more (learn more about home screen organization). 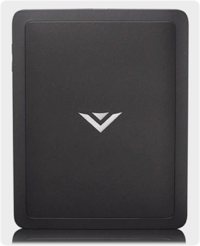