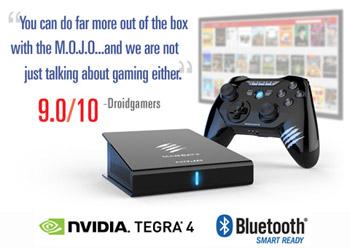 The Most Powerful Gaming and Media Box

M.O.J.O. by Mad Catz is a truly versatile gaming and media console. Connect M.O.J.O. to your HDTV to play Android games, surf the web, stream media, and connect with your friends. Root and customize, modify and create – the stock Android OS lets you take M.O.J.O. where you want to go. Bluetooth keyboards, controllers, headsets, and mice to M.O.J.O., your PC, and other smart devices.

Class-leading hardware promises blazing-fast gaming and great-looking video playback. M.O.J.O. employs a 1.8GHz NVIDIA Tegra 4 processor with 16GB onboard memory and 2GB RAM. A GPU with 72 custom cores delivers the ultimate graphics performance. You also get support for 5.1-channel surround sound, Ethernet and Wi-Fi connectivity, plus the ability to use M.O.J.O. as a wireless hotspot. And, automatic over-the-air updates keep you current with the latest build.

As any Android power-user knows, the best way to get the most out of your device is to root it. Rooting opens up all sorts of options including expanded access to Google Play and the ability to install custom ROMs. Mad Catz provides a short step-by-step guide to rooting, and our tech support team is ready to help. The best part – rooting won’t void your warranty.

View larger Much More than Games

M.O.J.O. isn’t just for playing games. It’s an all-in-one gaming and media center. Capable of Ultra HD 4K output*, surf the Internet, stream movies, stay connected to your social media accounts and listen to music, all from the comfort of your couch. (*4K output requires a firmware update and UHD media source. )

Open-platform design makes M.O.J.O. as adaptable as you are. Install apps and games from the Google Play Store, TegraZone, the OUYA store, OnLive and more.

If 16GB of memory isn’t enough, there’s a microSD flash slot for SDXC cards up to 128GB. Two USB ports let you connect to your external media drives. Therefore, with M.O.J.O. by Mad Catz gaming and media console you need not worry about data storage space. You always have the option of extending it.

Download OnLive’s app to play hundreds of PC games streamed to M.O.J.O. from the cloud. And, courtesy of OnLive’s CloudLift service, you can even play a selection of CloudLift-enabled PC games that you already own after purchasing them through an online account such as Steam. OnLive* delivers AAA PC games from leading publishers including Codemasters, Deep Silver, Devolver Digital, Gaijin Entertainment, Kalypso Media, Paradox Interactive and Warner Bros. , and makes them playable with a gamepad in the living room. Play and watch games on your HDTV or even upscaled to 4K on your M.O.J.O.! (*At this time, the full OnLive Game Service is enabled for these service regions: United States, Canada and the UK [England, Northern Ireland, Scotland and Wales]. If you are located outside of these supported regions, you will be unable to make purchases in OnLive. OnLive hopes to support other regions in the future, but have no information on when that will be or which regions that might include.)

View larger Play Smart with GameSmart – Your Devices, Your Games and Media, Anywhere