A professional-grade tablet, the BlackBerry PlayBook helps transform the way you work and play by combining the features you need with a powerful, ultra-portable design you want. You’ll enjoy uncompromised Web browsing, true multitasking, and brilliant multimedia playback, as well as advanced security features and out-of-the-box enterprise support. 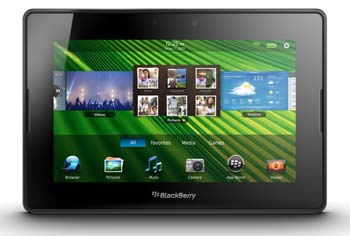 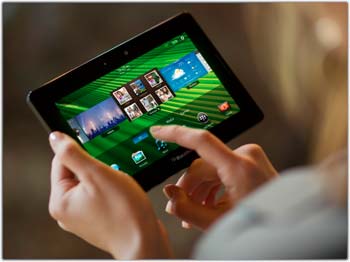 Measuring less than half an inch thick and weighing less than a pound, the PlayBook features a vivid 7-inch high-resolution display that looks and feels great in your hand–and it supports 4-fingered multi-touch gestures. Wirelessly connect to your BlackBerry smartphone for real-time access to email, calendar, address book and task list, Documents To Go and BBM using BlackBerry Bridge (see more details below).

The PlayBook also offers a high-fidelity web experience with support for Adobe Flash Player 10.1, Adobe Mobile AIR and HTML-5–enabling you to enjoy all of the sites, games, media and richness of the full Internet. And you’ll enjoy immersive 3D games thanks to the built-in accelerometer and 6-axis motion sensing (gyroscope).

With the BlackBerry PlayBook tablet, you get access to the full web–not a scaled down mobile version. That means you get all the rich websites, games, and videos, the way they are intended to be enjoyed. The PlayBook offers support for Adobe Flash Player 10.1 and Adobe Mobile AIR as well as HTML5 and Webkit browser technology.

Other tablets claim to support multitasking, but it just isn’t the same. On the BlackBerry PlayBook, apps can run simultaneously and in real time. It’s a sophisticated approach to multitasking–giving you more choice around how your applications run, allowing you to tailor the experience to your individual needs.

Don’t settle for amateur grade multimedia. Whether you’re mobilizing your existing pictures, music, and videos, discovering new media or creating new content, the BlackBerry PlayBook tablet offers a high fidelity, multimedia experience allowing you to fully immerse yourself in whatever you enjoy. 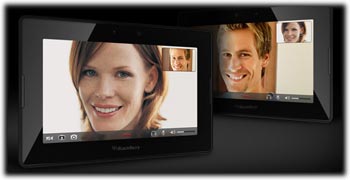 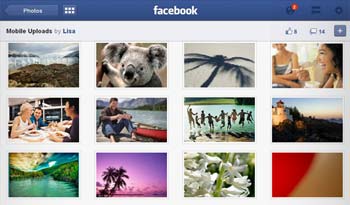 The 7-inch multi-touch capacitive display has a 1024 x 600-pixel resolution for stunning playback of video and immersive 3D games. The PlayBook also comes with an HDMI output for connecting to a compatible HDTV or monitor and playing back Full HD 1080p video. It’s compatible with video encoded in H.264, MPEG4, and WMV formats.

You don’t spend your life on the couch, neither should your tablet. Your BlackBerry PlayBook tablet is perfectly suited to your busy lifestyle–it’s small enough to go anywhere and powerful enough to take you everywhere.

And with the dual cameras, you’ll be able to video chat with friends and family wherever you roam (and are connected to a Wi-Fi network). The forward-facing camera has a 3-megapixel resolution while the lens on the back offers a 5-megapixel resolution–and both cameras can capture video up to Full HD 1080p.

Discover a huge catalog of rich apps developed and optimized just for the BlackBerry PlayBook tablet–all available through the BlackBerry App World storefront. Games like Need For Speed Undercover and Tetris, an eReader from Kobo and a powerful music store by 7Digital are just a few of the pre-loaded apps that come with the PlayBook. You can also download the Facebook for BlackBerry PlayBook app, which integrates popular features and functionality such as Facebook Chat, view and add friends, and interact with the News Feed.

The BlackBerry PlayBook tablet is designed to empower those who want tools to power achievement. PlayBook enhances personal productivity and offers businesses a straight forward, no hassle way to quickly embrace tablet technology. It includes DocsToGo and Adobe Reader software as well as support for enterprise VPN connectivity and corporate intranet browsing.

You’ll get 90 days of complimentary technical support. Speak with a BlackBerry expert if you need help or just want to learn more about your tablet’s unique features.

Do I need to have a BlackBerry smartphone for the BlackBerry PlayBook to work?

What is BlackBerry Bridge?

What is necessary to download attachments to the PlayBook via Bridge? MicroSD card in the BlackBerry Smartphone that is bridged. Room on the MicroSD card for the content being downloaded. The attachment has to be under 3 MB in size for it to download. Which apps does Bridge work with?

BlackBerry Bridge is a feature that allows BlackBerry smartphone owners to interact with core BlackBerry applications including email (BIS and BES), calendar, contacts, on the Playbook’s large 7-inch high resolution screen. BlackBerry Bridge links the two devices notification systems so you are alerted of new emails, BBMs, and calendar reminders right on the PlayBook’s display. Through this same relationship, businesses running BlackBerry Enterprise Software can allow their employees to securely access information found on corporate internet sites using PlayBook. You also have access to your Smartphone browser so you can get on the web from virtually anywhere.

What smartphone software version is required to use Bridge?

Is it true that the BlackBerry PlayBook will support Android apps on the PlayBook?